"Source" as an important button???
I recently bought a nice 2015 Honda Fit.

While there is lots to love about the car, there are a few bad UI choices they made that I want to blog about.

First off is the placement of the front seat cup holders.

There are two important factors to good UI design: 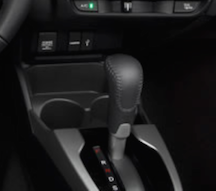 Here we have two commonly used functions competing for space: the shift lever and the cup holders. But I believe they switched the importance.

While it is true that every time you use the car you will need to use the shift lever, the nature of a shift lever is that once it is set, it sits in the same place for the majority of the drive. In my case, I shift to reverse for a few seconds, then switch to 'D' for the next hour and then 'P' at the end.

The placement of the cup-holders makes it somewhat awkward to get cups in and out. You have to lean forward and lever the cup to the side to make it clear the front dashboard overhand whenever you go to place or remove a cup from the holder. And when you do use the cup-holders, you will tend to use them many times during a trip, taking your cup from the holder and replacing it.

So while the shift lever is very commonly needed, it does not need to have prime placement. It should be slid forward more up under the dashboard overhang so the cup holders are more open and easier to use.

(This gripe is separate from a gripe about the fact that there are no easy-to-use cup holders for the back seat!!)

More annoying to me is the control layout for the audio functions on the steering wheel.

Volume Up/Down is tied to the Up/Down presses. Skip Forward/Backward are tied to Left/Right presses (I would prefer fast-forward/rewind, but skip is ok). But what gets me is the center button dedicated to "Source".

When you press the center button, the audio toggles between iPod/Aux in, bluetooth, FM, AM and back around.

Is this really something people do often enough that there needs to be a button dedicated to it so prominently placed (see #2 above)??? Just off-hand I can think of some better uses for the most prominent button:

So far the misplaced "Source" button has caused me grief many times and the fact that it is so useless (really??? Who changes audio source that often?) encourages me to consider rewiring the steering wheel just to disable it if I can not turn it into something vaguely useful.