Warning: Trying to access array offset on value of type null in /home/aoqkbxxj/public_html/mesazero.com/m/local/config.php on line 119

The World and Geography of Fairy Storm : Overview

The World of Fairy Storm used to be a barren, lifeless and nearly atmosphere-less world.

Some time in the distant past, a titanic collision carved a deep gouge in the world nearly 8000 km long, 2000 km wide and kilometers deep.

In time, atmosphere collected in the new valley and life found its way from alternate worlds via Magical portals.

Most regular people do not know the nature of the valley, although the name for the world in most languages implies "valley" or "crack". Even people living along the base of the walls think of them more as large mountains.

The walls of the valley are fairly steep and extremely high. Often kilometers high. 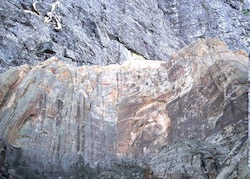 Climbing is difficult but not impossible. With careful planning, paths can be found where the slopes are rarely more than 60 degrees. Expeditions to the tops of the walls have to be heavily supplemented by Magic to make it as the "top" of the walls is the barren wasteland and nearly airless realm of the world's true surface.

Since most of the valley is located above the equator, the Northern Wall can at least get sunlight. Most of the Southern Wall exists in perpetual shadow since the sun never rises above the wall-tops.

Most of the walls are uninhabited and uninhabitable except by rare and extremely hardy mountain folk eeking out a harsh living in the nearly barren caves, stream-cut valleys, and tiny plateaus. The air is thin and cold and most surfaces are bare exposed rock.

Insert pic of vertical city That is not to say there is not a living to be made on the walls.

The groups that do call the walls home sell rare minerals, gems, and magically infused lichen to the "flatlanders" and in some places there are extensive systems of rope pulleys and paths to bring carts up and down nearly vertical railways.

Isolated wall homesteads dot the Wall up to several kilometers high where small families and groups make do in whatever nook they can find comfort. Some groups "migrate" along worn paths harvesting valuable lichen and rock algae before moving on to the next outcrop.

The few "cities" on the Wall would be called little more than towns in other regions but have some of the most dramatic architecture in the valley. Carved from the bare rock by the skilled hands of Dwarven artisans, wall cities can actually stretch for hundreds of meters vertically, horizontally, into the Wall itself, and dramatically outward into the open air on giant buttresses of metal and stone.

Wall cities are mainly inhabited by a mix of Dwarves and humans all extremely hardy from the harsh conditions and generally untrusting of outsiders although they are often more than willing to trade for flatlander goods.

While they are called mud hills, the ground is quite solid and extremely fertile with all the soil, minerals, and organic material washed down from the high slopes.

Much like the Walls, the Northern Hills are get more regular sunshine. The Southern Hills are harsher, but do make better land for specialized mushrooms and mineral mines.

Magic is slightly more common in the hills than elsewhere in the valley even though Fairy sightings are rarer. Some speculate that Magic "pours" down the Walls to spill onto the Hills.

The hills are sparsely populated by farming communities and groups of individual homesteads working the rich soil for rare and exotic plants or carving deep caves and harvesting mushrooms and other dark adjusted plants and animals. Many mining groups also dig for rare minerals and exotic gems. These groups are more often human as Dwarves prefer the more mineral infused stone of the walls or the more mountainous regions.

Even the rock itself is valuable. While not as strong as most wall-borne rock, it is easily carved and serves as decoration as well as its use in magical enchantments and runic inscriptions. If a vein of magically infused rock is found it is harvested like the purest gold and sold for a premium.

Trading centers along the bases of the hills are densely populated by a wide variety of humans and other races. They are the "industrial centers" of the world. The cities bring in wood from the foothills, and minerals and metals from the hills and walls and various groups produce many of the goods that make their ways to all points in the valley.

Extensive cart systems connect outlier communities to the trading centers. The cart systems can be powered by waterfalls, wind, or old-fashioned human-power. Huge cisterns exist high in the mountains to power some of the longer routes.

Merchant trains regularly travel from trading centers in the Mud Hills to most major ports in the wider valley.

Stretching between the mud hills and the central plain is a region generically called "the foothills".

In other worlds, the region would be called "mountainous". But compared to the towering walls and huge mud hills, the mountains of this middle region dwarf in comparison. 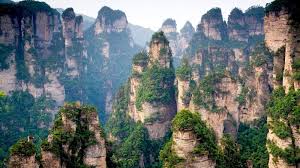 The rocky mountains of the foothills region run right up to the mud hills and are interspersed with deep ravines and crags, sudden up-thrusted granite pillars, and ancient worn volcanoes. These mountains slowly give way to more lower and rolling hills before things flatten out at the edge of the central plains.

Deep forests cover most of the non rocky land and many of the forests house the most ancient trees in the world.

Much of the forest regions have been abandoned and forgotten as time and the trees slowly engulfed ancient cities and outposts.

Most of the big rivers have their headwaters in the foothills region.

Inhabitants of the Foothills

Some of the larger mining colonies exist in and under the rocky mountains found in the foothill region and along the base of the Mud Hills.

In the more rolling lower hills, the towns often specialize in lumber and crafts or serve as headwater ports on the rivers. Trappers and hunters range through the dense forests and specialize in furs and exotic animals.

People who live in the forested foothills range from open hearted crafters in the great craft halls to loner mountain folk. Bandits use the thick forest as protection and hideaways.

From the Foothills to the Central Sea are the flat plains, scattered woodlands, and smooth rolling rivers of the Central Plains.

Most of the major towns in the plains are located along the rivers and are surrounded by large farming communities producing agriculture and animal goods.

The wide-open spaces between towns are sparsely inhabited and rarely travelled except along well patrolled routes. Travel is often dangerous not just due to raiders, but also for large herds of herbivores and other dangerous wild animals.

Like the modern kingdoms and city-states, many of the ancient kingdoms were established in the Central Plains and adventurers still find ruins and abandoned castles.

The Easternmost part of the valley is much higher than the Central Plains and is blanketed by snow and thick glaciers.

It is a harsh environment, but not lifeless. Large, thick evergreen forests and expansive open taiga are home to large herds of elk and other hardy animals.

A few settlements scatter the area.

Many of the portals that occasionally still open to other worlds form in and around the Western Icefields.

Stretching nearly the entire length of the valley is the Central Sea.

The sea varies from narrows merely hundreds of meters wide to huge seas hundreds of kilometers wide. Inlets, deltas, fjords, marshy lowlands, and all kinds of other features can be found along the length of the sea.

Large fishing and port communities dot the coastlines and major islands. Merchant fleets sail along the length of the sea. The great cities of the valley are situated on the coast of the central sea.

Volcanic activity is common and volcanic islands make parts of the sea hard to navigate. Combined with the frequent and dangerous storms, the sea can be a dangerous place.

The cataclysmic event that carved the gouge ripped the surface of the world and caused great bouts of volcanic activity. As the eons passed the lava receded from most places leaving expanses of huge caverns under the world.

The Dark Elves settled into some of these caverns, but 99% of them remain unexplored.

Copyright 2006 - 2021 by Mesazero LLC
All Rights Reserved unless otherwise noted
Mesazero® is a Registered Trademark of Mesazero LLC.