7th of Ties, year 122
Today, I met a squad of guardsmen led by Captain Fullers from the city of Patronia much farther to the West. ...

...He had slept under the stars and in the wild before, but never as far from his old home as he did now.

...In the morning, he rode west against the sunrise along the old, worn path that passed as the road. Around midday, he turned back to see how far he had gone and realized that he could no longer see the valley that had been the edge of his world.

...On the third morning of his journey, Tilland saw approaching riders in the distance. He knew he could hide in the woods along the side of the road, but their riding colours indicated they were guardsmen, and he suspected hiding from them would be a good way to get in trouble. 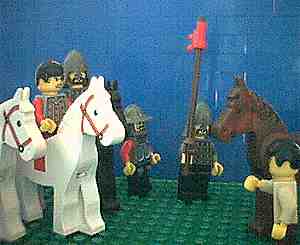 ...The horses pulled up just short of where Tilland waited. The riders seemed uneasy, but not threatened.

..."I am Captain Fullers of Patronia," called the lead rider. "What city do you hail from?"

..."I rode out to find my place. I am the third son of a small landholder and could find no apprenticeship in my town, so took my horse and rode into the sunrise."

...Fullers dismounted and eyed the young Tilland. The other riders relaxed as their captain dropped his guard. "I myself am also a third son. My place was found in the guardsmen. Tell me, what skills do you have?"

..."I have few skills, but learn quickly. I have done much hunting with a short bow my father fashioned for my oldest brother."

The captain offered me a place in the guardsmen. It is a dangerous life, but the pay is good and it will give me a chance to meet many new people and find out some about the area.

The captain offered me a place in the guardsmen. It is a dangerous life, but the pay is good and it will give me a chance to meet many new people and find out some about the area. ...He turned back to Tilland, "We are having troubles with the Tremen of the North and need good men. When I saw you on the road, I was going to have you pressed into service and your horse assigned to cavalry. 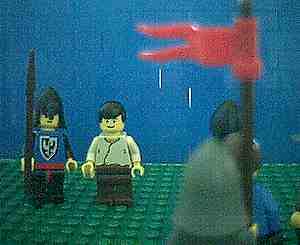 ..."But I see now you are a good man, and I am rarely wrong with new recruits. You will find a good life with my troops and you will do well.

..."I've got to ride further to check the ramparts in the hills, but I will return to check up on you personally!" Fullers shook Till's hand with the strong confident grip of a man sure of his place. And with a quick whistle, he led several of the riders on a fast pace into the treeline.

...Tilland was sad to see his horse led off, but the coins in his pocket felt heavy, and the sash on his belt in the colours of the guardsmen made him proud.

...The cart ride to the camp was easy and gave Tilland some time to talk to other new recruits. Few knew much about how the war was going, only that the Tremen had broken the long peace between the Southern Lords and the Northern Reaches.

Camp is dismal, but I didn't expect much. I met my bow squad today. Most of the men are far better at bows than I, but they have helped me get familiar with the bows they use here.

...Tilland knew little about the world and tried not to sound too ignorant. The only tales he had ever heard of the Tremen were of the times when raiders had besieged Gis many years before even his father was born. He told the few children's stories he knew, but mostly listened to stories about legendary Lord Kay.

...A seasoned fighter named Madsen told most of the stories. Madsen was 18 and had just been reassigned up from Biddle province somewhere in the south. His stories moved from children's bed time stories to a warrior's drinking tales fluidly.

...The stories made Lord Kay out to be some super hero who united the Southern Lords to fight back raiders and armies from the North before being slain on the fields of Aviog. The Tremen, led by Lord Front were so impressed by his fighting and bravery that the Pax was signed on the very rock Lord Kay's blood had soaked.

...The morning rose on the cart as it entered the camp. The wide field was mud soaked and smelled of old water and rats, but the tents were clean enough and the men who milled about in the morning smiled comfortable smiles of the well rested.

...After breakfast, Madsen and Tilland were led to their new squad.